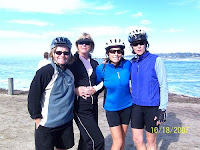 A new study reveals that pine bark extract from the French maritime pine tree, reduces hot flashes, night sweats, depression, and other common symptoms associated with women entering the menopause transition. The results suggest pink bark extract may serve as an alternative treatment to estrogen replacement therapy, which is the most common remedy of pre-menopause ("perimenopausal") symptoms.

According to the U.S. Department of Health and Human Services, perimenopause is the natural part of aging that signals the ending of a woman's reproductive years. It marks the time when a woman's body begins its move into menopause and can last anywhere from two to eight years.

Additionally, patients visited the clinic at one, three and six months following start of treatment. At each visit, BMI, blood pressure, lipid profile and total antioxidant status were recorded.

After six months, LDL (bad) cholesterol dropped by 10 percent with the pink bark extract treatment compared to placebo. Patients who supplemented with the extract also had increased antioxidant levels compared to the placebo group. During treatment, rapid improvement of symptoms was reported from the pink bark group after one month. All symptoms of the WHQ improved significantly compared to the start of treatment, and patients did not report unwanted side effects. In the placebo group, no significant changes of symptoms were recorded.

There is a shift away from the use of hormone replacement therapy due to side effects and in its absence women are searching for safe and natural options to help manage their symptoms. This study investigating pink bark extract as a potential natural alternative is very encouraging in view of the safety of pink bark as it does not behave like a hormone.

This is all great news because a natural remedy without side effects is a beautiful thing for women suffering from the effects of menopause.
Posted by Neeters at 1:52 PM