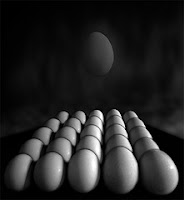 I broke my leg skiing last weekend which has me on the search for natural supplements to help me heal and to diminish the joint pain that I've been experiencing. Additionally, as I transition through menopause, bone and joint health is a huge concern. Today, I came across a very promising study that I'd like to share.

Scientists found that extracts from the membrane of an eggshell may improve the symptoms of osteoarthritis, and offer an alternative to glucosamine and chondroitin sulphate .

A daily supplement of 500 milligrams of the eggshell membrane was found to not only reduce joint pain, but also stiffness, with effects noted after only ten days, according to results of a randomised double-blind trial.

The researchers also report that the effects were superior to those recorded in previous clinical investigations for glucosamine and chondroitin, the big hitters in the joint health supplements world.

Sixty-seven people with osteoarthritis( a large percentage were menopausal women) were recruited and randomly assigned to one of two groups: The first received NEM (500 mg), and the other received a placebo. The researchers used the Western Ontario and McMasters Universities (WOMAC) Osteoarthritis Index as a measure of arthritis symptom, as well as pain, stiffness, and function.

According to their results, volunteers receiving the eggshell membrane experienced a “relatively rapid response for all WOMAC scores”, compared to placebo.

By the end of 60 days, statistically significant improvements for both pain and stiffness were recorded by the researchers, while joint function was not significantly improved, they said.

“By the end of the follow-up period, the mean response remained approximately 15 per cent for all WOMAC scores except stiffness which was 26.6 per cent,” wrote the researchers.

While this is superior to the response shown for glucosamine and chondroitin in previous clinical investigations, it failed to reach the expected 35 per cent response rate employed in the clinical design. Nonetheless, researchers say that the results are significant.

This is a great article egg shell can help to relief the pain, it just now i know it in this article.