Soy or Dairy....Which One Is Best For Our Health? 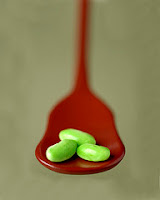 Which is healthier over time—soy products or dairy products. There is so much info out there is gets confusing. Here’s what I’ve discovered.

Most nutritionists agree that soy in moderation is okay as long as you are aware of the phyto-estrogen compounds in soy that block the action of your own self-made estrogens.

Nutritionists don’t recommend consuming soy products in doses higher than what historically has been eaten in the general Asian diet. The soy story is complicated because it becomes an economic issue. The problem being researched is what happens to older adults when large amounts of soy milk are consumed. Almond milk also is an alternative to cow's milk.

The soy industry competes against the dairy industry. Most nutritionists still maintain that soy in moderation is not unhealthy, but soy in large amounts can have ill-health consequences. Soy stimulates the thyroid. The question is how much, and what effects are being researched?

Asian communities have eaten soy for centuries, but in small amounts, including fermented soy products. Asians aren’t consuming huge quantities of soy burgers, or drinking soy milk by the gallon, making tofu smoothies using 16 ounces of soy mixed with fruits in blenders, or using salty textured soy protein as hamburger fillers.
Also, isoflavones from soy have been extracted and bottled to be sold as phyto-estrogens (plant estrogens) as a menopause aid. The effects of large amounts of isoflavones on the thyroids of menopausal women are still being researched. Again, results aren’t in with conclusions, but numerous articles abound touting various negative effects of soy used in larger amounts than what has been used historically as part of the Asian diet.

The milk industry is threatened by consumers in large numbers turning to non-dairy substitutes. Claims from the non-dairy supporters report that homogenized milk contains fat molecules so tiny that they pass through the arteries and scar them, producing lesions leading to plaque deposits and hardening of the arteries.
Before homogenized milk became mass produced, prior to 1920, milk didn’t have this effect, say the non-dairy supporters. On the other side of the issue, the dairy industry claims that skim milk is safe.

Studies vary from reporting milk contributes to ovarian cancer, diabetes, and heart disease on one side to the benefits of milk on the dairy industry side. Studies vary widely, some showing less bone fractures in Chinese women eating some soy. Negatively, studies also recently showed an increase in Alzheimer’s disease and dementia and more cognitive decline in men eating soy in moderation. The soy issue is complicated, political, economic, and medical.

Previous to that article, research in the media suggested that soy also reduced the risk of heart disease and cancer. What researchers looked at in the late 1990s focused on a three-year animal study that showed that chemicals found in soy, called phytoestrogens, appeared to reduce the number of protein changes in the brain that are associated with Alzheimer's disease.

Around the year 2001, reports came in to the media revealing how phytoestrogens mimic the action of the female sex hormone estrogen. At that time, the results of hormone replacement therapy with estrogen were not yet in, and estrogen was thought to reduce a woman's risk for heart disease and osteoporosis.

Later, science found that hormone replacement therapy had no effect on preventing heart disease. Back in 2001, estrogen also was thought to protect against Alzheimer's disease. So as researchers from the University of Alabama at Birmingham examined the impact of certain types of phytoestrogen found in soy, known as isoflavones, conclusions were made that today have negative impacts. Also, the 2001 study was carried out on aged female monkeys that had their ovaries removed to mimic the effects of being in menopause.

By 2005, studies hit the news stands on how soy eating and cognitive decline in men are possibly connected. What the public didn’t know is that the original articles were presented at the 1999 Soy Symposium in Honolulu. According to that 1999 Pacific Health Research Institute study reported at the Soy Symposium, poor cognitive test performance in late life was associated with higher midlife tofu consumption.
The political issues today include new findings that estrogen replacement therapy has been found to have negative effects on women with heart disease or its risks, and tofu is still in a major political controversy. More soy products are being manufactured, and the dairy industry is losing consumers to alternative beverages such as almond milk, rice milk, and oat milk not containing soy products.
Be cautious and don’t take soy isoflavones and vitamin C together. In one study, blood pressure was raised significantly-- extremely high-- in one formerly normotensive (normal blood pressure) individual who combined the two during a research study.

Another unrelated study at Yale University in 2000 revealed that the cognitive decline that may accompany old age or degenerative diseases such as Parkinson’s disease could be caused, in part, by a lack of estrogen. 24 You can see that there are political and economic issues that tie nutrition, hormone replacement, and age into issues that change frequently—almost daily as new studies come in and old studies appear to show their flaws. How do you make a decision?

Meanwhile, thousands of women on hormone replacement therapy to help night sweats and other menopausal symptoms continued to eat high soy diets, pop calcium pills in high dosages, and take isoflavone tablets as touted by some food supplement vendors at numerous holistic health fairs a decade ago.
Today, taking isoflavones without looking at its effect on one’s thyroid and blood pressure is not recommended. Be aware of what you eat and stick to natural foods the way they grow if you’re not monitoring yourself medically on a daily basis. Personally, I hate the taste of soy milk so I prefer almond milk or low fat milk (non-fat is harder for me to digest). The key is moderation in whatever you choose.
Posted by Neeters at 1:39 PM

Good post. I think that soy has a place in helping with menopause symptoms naturally, but the vitamin D and calcium in dairy like milk is also important. I have articles about soy and the importance of vit D and calcium during menopause at Http://www.menopauseremedies.net