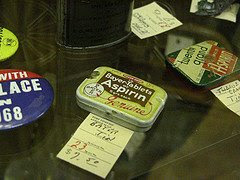 In addition to the more common menopausal symptoms like hot flashes and night sweats, post menopausal women have a higher risk of heart disease. New results from the Women’s Health Initiative (WHI) Observational Study provide additional evidence that aspirin may reduce the risk of death in postmenopausal women who have heart disease or who have had a stroke. So ladies as we put on our Cool-jams wicking pajamas to help with night sweats, we might also think about taking the daily dose of aspirin as a preventative measure.

The study provides new insight into aspirin dosing for women, suggesting that a lower dose of aspirin (81 milligrams, or mg) is as effective as a higher dose (325 mg). This is good news for women who might be concerned with internal bleeding, a well-known risk of aspirin that may be more likely with higher doses of aspirin, according to other studies. However, randomized clinical trials are needed to determine the optimal doses of aspirin in women with cardiovascular disease.

Scientific evidence indicates that, in general, aspirin lowers the risk of death and incidence of heart attack and stroke in patients with a history of cardiovascular disease; however, the benefits of aspirin in women with stable cardiovascular disease in particular are unknown. In this study, researchers analyzed data from 8,928 postmenopausal women who had previously had a heart attack , stroke, or coronary bypass surgery to improve blood flow. Participants were followed for an average of 6.5 years.

The size of the WHI Observational Study and the diversity of participants provide valuable insight into the use of medications in the primary care setting. For example, the study found that only 46 percent of women with stable cardiovascular disease in the study reported taking aspirin regularly, despite current guidelines recommendations. In addition, subgroup analyses indicate that black women and women with Medicaid insurance were less likely to use aspirin as recommended, compared to women of other ethnic groups and insurance status.

The WHI is a major, 15-year research program designed to address the most frequent causes of death, disability, and poor quality of life in postmenopausal women: cardiovascular disease, cancer, and osteoporosis. The WHI Observational Study is a nationwide, prospective study to examine the association between clinical, socioeconomic, behavioral, and dietary risk factors and the subsequent incidence of several health outcomes. The Observational Study followed 93,676 postmenopausal women between the ages of 50 and 79 for an average of 8 years. Participants filled out health forms and visited their clinic physician periodically; participants were not required to take any medication or change their health habits.
Photo by Fiona Paloma
Posted by Neeters at 7:29 AM

Thanks for this.Very interesting as I have pondered the question of whether I should or whether I shouldn't, often. There are so many conflicting reports. I give it to my mother, and the BF takes one a day, I just hadn't jumped on the bandwagon yet. Thanks again.