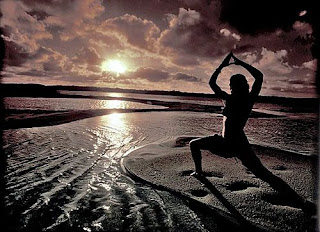 To investigate whether yoga would help women with physical and cognitive symptoms of menopause, scientists randomly assigned 120 menopausal women, 40 to 55 years old, to either yoga practice or the control group which focused on simple stretching and strengthening exercises five days a week for eight weeks.

The postures, breathing and meditation included in the yoga sessions were aimed at relaxing the mind and slowing down racing thoughts.

Women in the yoga group also listened to lectures on using yoga to manage stress and other yoga-related topics, while those in the control group heard lectures on diet, exercise, the physiology of menopause, and stress.

After eight weeks researchers found that women in the yoga group showed a significant reduction in hot flashes , night sweats , and sleep disturbances, while the women in the control group did not .

In a test of memory and intelligence with ten components, the yoga group improved in eight tasks, while the control group only improved in six of the tasks.

In summary the study showed the superiority of yoga over physical activity in improving the cognitive functions. This can most likely be attributed to the emphasis on correctness in breathing, synchronizing breathing with body movements and relaxation.
Posted by Neeters at 8:32 PM

YOGA THERAPY is the science of applying the various techniques of yoga in a
variety of illnesses and conditions, to facilitate optimal health, healing
and awakening. Classes are designed for the individual or group with a
therapeutic focus for a specific health condition e.g. cancer, heart,
prenatal, diabetes, multiple sclerosis.