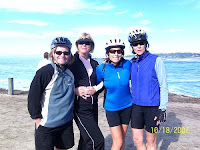 Obesity has always been known as a danger to women’s health; however, recent studies have linked obesity and breast cancer in a variety of ways.

Doctors aren't sure why this link exists and are trying to figure out what ties weight gain to breast cancer. But they are more and more convinced the link is there, and they are urging women to watch their weight and increase their exercise to helpstave off breast cancer which is the most common cancer among females

Studies have found that, in general, obesity is linked to cancer. The higher a person's body-mass index (BMI, a ratio of weight to height), the more likely she or he will develop cancer, according to recent research by scientists at the University of Manchester in England.

Scientists vary in their opinions on why this link exists, and what it means.
Some believe that obesity may make tumors harder to find. Researchers also believe that the systemic effects of obesity might do something stimulate cancer cells. For example, obesity or overweight can lead to fluctuations in hormone levels in the body.

Another link to obesity was found in a study from the University of North Carolina at Chapel Hill that showed that obese women are more likely to skip screenings for breast and cervical cancer. Without those screenings, women are less likely to detect breast cancer at a more treatable stage.


Menopause appears to be a critical time.. Obesity creates a greater risk for breast cancer post-menopause, while pre-menopausal women actually have a reduced risk.

The increased risk of developing breast cancer and dying of it after menopause is believed due to increased levels of estrogen in obese women.

There is good news. Studies have shown that exercising at a moderate to intense level for 30 to 60 minutes per day, can decrease breast cancer risks. So ladies, get your groove on and start biking, walking, dancing or running. The key point is that you need to get your heart rate up to receive the benefits of exercise.
Posted by Neeters at 3:53 PM