Can Certain Foods Make Us Happy? 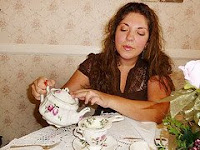 As women go through menopause or are merely passing through the ups and downs of life, there are times when moodiness can set in. Then you have that cup of coffee and cookies with a good friend and life suddenly seems better. As it turns out, scientists have a solid explanation for that burst of good cheer. Studies by Richard Wurtman, MD, and Judith Wurtman, PhD, at MIT have shown that eating on readily digested hight carbohydrate foods, like cookies or bagels, can raise the brain's level of the chemical serotonin, the very same aim of modern antidepressants.

There are many other foods sometimes known as mood boosters. Coffee and Tea boost energy which can also indirectly boost one’s mood, however there is no indication that they boost serotonin levels.

Alcohol is commonly thought of as a quick fix to fun, but it has a dark side. Although a recent study found that moderate drinkers (two drinks a day for men, one for women) had fewer depressive symptoms than nondrinkers, many other studies have established that alcohol in large quantities can be a devastating depressant. In moderation a drink a day for women could be beneficial.

As for chocolate, which many of us reach for as a pick-me-up: Australian scientists concluded recently that eating the sweet to lift your spirits "is more likely to lengthen the period of sadness versus shorten. If you’re like me and love chocolate, stick to a 1-ounce serving if you want to benefit from chocolate's disease-fighting antioxidants.

That brings us to the coffee and cookies, which can brighten your spirits when eaten judiciously. Incidentally, carb snacking may be more effective for women because they produce substantially less serotonin than men do. Now, you won't want to try this regimen if you have diabetes,;however, if you qualify, try raising your mood-lifting serotonin levels a couple of times a day by doing the following:

• Include protein in each of your three meals. This will raise blood levels of tryptophan, a chemical that eventually turns into serotonin. The best sources of tryptophan are poultry, seafood, and lean meat.
• Have a small carbohydrate snack about 3 or 4 hours after each meal and about 1 hour before your next one. Make sure that your stomach is empty and that you eat no protein between meals. The carbohydrates should be easily digestible--such as one or two oatmeal cookies, a third of a bagel, a slice of whole wheat bread. This will cause tryptophan in your blood to enter the brain, where it is metabolized into serotonin. Elevated serotonin will improve your mood within 20 to 30 minutes.

photo by: Melissa
Posted by Neeters at 12:35 PM