Hot Flashes Have Been Linked To Brain Fog 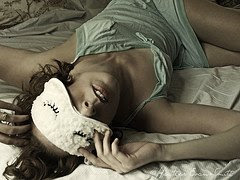 A recent study of 29 middle aged women with moderate to severe hot flashes suggests that there might indeed be a connection. The women were provided with monitors that measured changes in skin conductance during a hot flash. Hot flashes were recorded for a full 24-hour period, with the average number of hot flashes coming to 19.5 per day.

So ladies, this is good news. Be sure to get plenty of sleep and rest assured that your memory will most likely improve once your hot flashes and night sweats improve.


Photo by: HSmith Photography
Posted by Neeters at 4:16 PM

I'm glad to have this confirmed by science and relieved to know that I'll be able to remember anything past 30 seconds once the 'pause is over with. I'm not sure how many more nights I can spend with throwing covers on and off 30 times a night, with fan blowing over my bed and windows open, and sweat dripping off my nose at the mere taste of a morning chai tea. Very funny to those I live with, but somehow I just can't see the humor in it...LOL.