CAN A BLOOD TEST PREDICT MENOPAUSE? 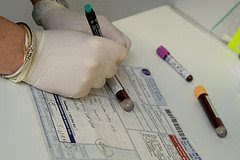 A simple blood test may soon be able to predict when a woman will go through the menopause. The test measures levels of a single hormone that falls as women become less fertile. Its creators say it is simpler and cheaper than existing tests which measure three different markers in the blood and indicate a woman's fertility by giving an idea of how many eggs are left in the ovaries.

The new test is designed to predict to within two or three years when menopause will actually happen. It measures levels of the hormone AMH in a small sample of blood.Levels of the hormone reflect the store of egg follicles in the ovaries. As this stock falls, women become less fertile. Women normally reach menopause between the ages of 40 and 60, with 50 the average, although fertility starts to fall rapidly after 35.

Knowing when menopause is going to begin could play a major role when it comes to deciding when to start trying to have children.

The test, which could be available in four or five years, is designed to be taken by women after their AMH levels have stopped rising, normally in their 30s.

In a study, published in the Journal of Clinical Endocrinology and Metabolism, they measured the levels of AMH in 144 healthy women in their 30s. The information was used to determine the link between AMH levels and age - and then to calculate what AMH levels would be later in life. Researchers then studied a second group of more than 3,300 women over 58 who had normal levels of fertility when they were younger.The average age at which they reached the menopause was 50.

By combining the findings from the two groups, the researchers were able to work out the AMH level that triggered the menopause. The findings still need to be studied for about 4 more years, however the blood test looks promising especially for women in their 30’s who want to understand how many years they will have before they are no longer fertile.

Photo By: Morgan Carpenter
Posted by Neeters at 5:08 PM

I thought this was interesting. I never knew they could tell by blood until a girlfriend went to the doctor recently. Seems strange to me that it could be that easy.